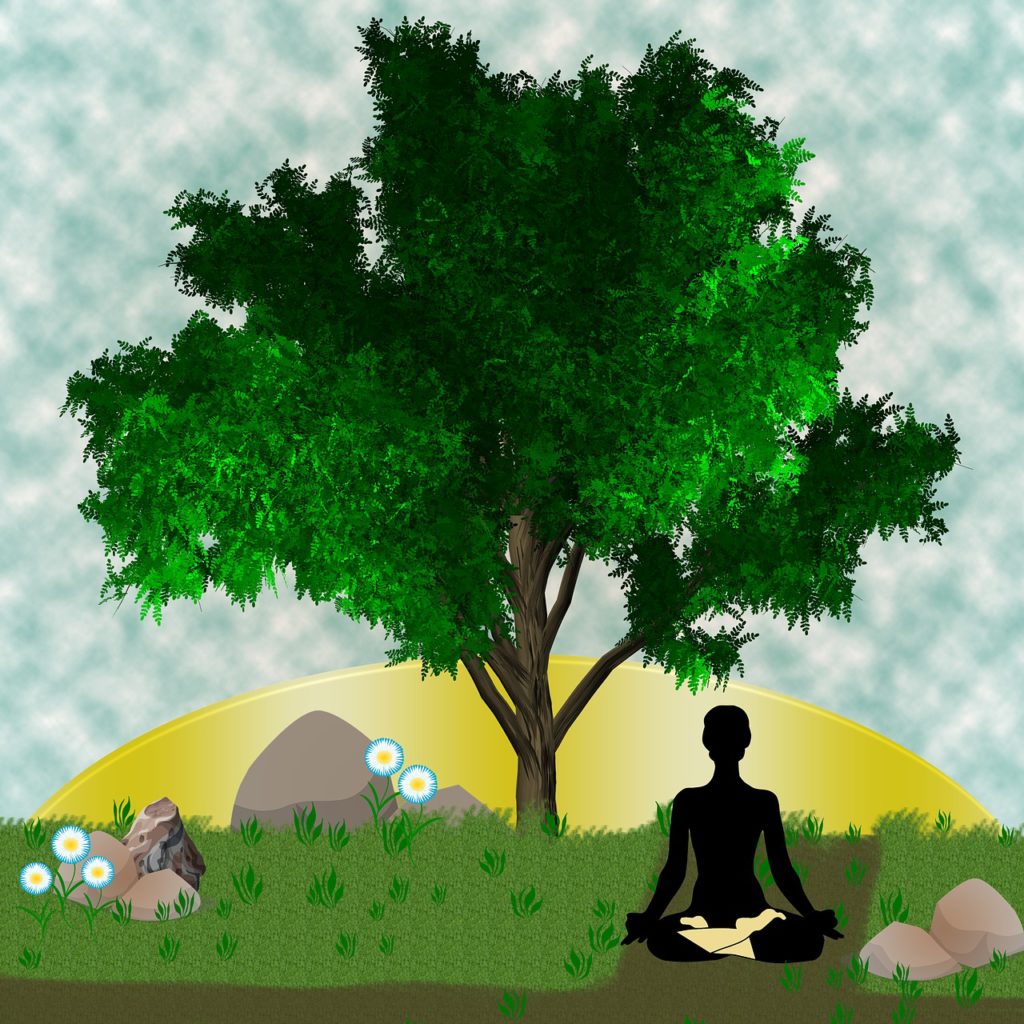 I hear the word “mindfulness” being thrown around a lot.

To me, none of these statements really make a whole lot of sense.

So in Buddhism, we use the term “mindfulness” to mean something very specific.

Important note: I need to mention that Buddhism is where the spiritual concept of the word “mindfulness” comes from. When it was translated from its Pali/Sanskrit counterpart (“Sati”), it was applied to an English word that had a “close” meaning. So “being mindful of noise levels” makes sense in a strictly English sense, but not when the term is applied to the spiritual concept of mindfulness.

Or putting those two things together:

This means when the memory of the past comes up, we use wisdom to be aware of its existence.

It needs to be stressed: Mindfulness, in this sense (the actual spiritual definition of mindfulness), does not only mean awareness.

It means a very specific kind of awareness.

I have a friend who told me:

“Sure, that’s your definition. But I have my own definition of mindfulness.”

Well OK, that’s fine. You can call whatever you want anything you want. But if you call a cup of coffee, “tea”, then not only is this “wrong” in an empirical sense, it’s downright confusing.

Apples and peanuts are two different things. If someone wants to call an apple a peanut, they are more than entitled to do so. But they’re failing to understand that labeling things in a subjective way without regard for the commonality of language causes great amounts of confusion and lessens the impact of understanding what the thing the word is pointing to actually means.

Understanding an apple as an apple is an important step, because now, there’s a common thread with the rest of the English speaking world – a name. Then, and only then, can we, working together, dissect what an apple is, how it’s to be used, and why it’s useful. 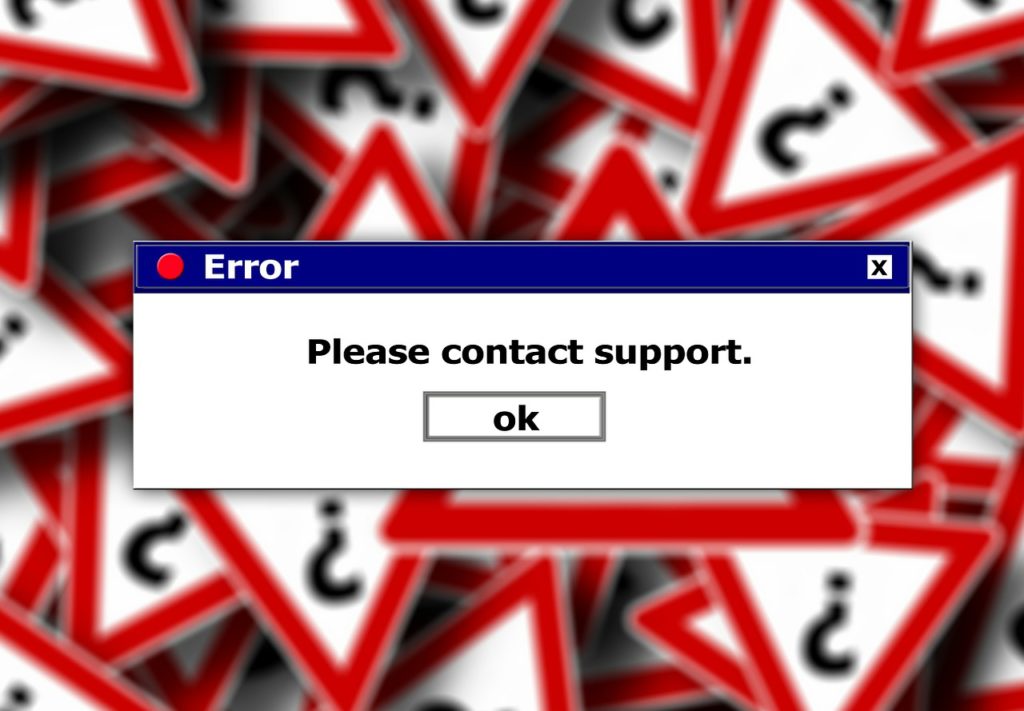 So understanding mindfulness in this way, we also need to understand another very misunderstood term – Karma.

Mindfulness is very closely associated with karma. Our karma is what we are being mindful of.

Important note: “Karma” in Buddhism is very different than “Karma” in Hinduism. (See What is Buddhist Karma?)

Essentially, karma can be seen as a habitual mental pattern that needs to be overcome to in order to liberate ourselves from suffering.

When karma comes up, it’s mindfulness which lets us not be swayed by emotions or sensations. Karma, in this context, can be viewed as every reaction to an experienced sensation.

When we eat food, the enjoyment or displeasure of a certain taste is karmic.

When we see an object, karma is what tells us if we like it or don’t like it.

When we hear music, it’s karma that decides whether we dance joyfully or whether we plug our ears in pain.

Mindfulness is simply treating karma in an objective way.

A beautiful piece of music is really just a sound. It’s only beautiful because of karma. Likewise, your roommate loudly having sex at 4 in the morning is also just a sound. You’re only annoyed because of your karmic reaction to the situation.

Your enjoyment or displeasure is due to a lack of mindfulness.

Because when you’re being mindful, there is no enjoyment or displeasure.

Objects are treated simply as they exist: In a purely objective way.

The same goes for all sensations:

Whenever one of these sensations arises, if we react with, “Oh yeah, I like this,” or, “Oh no, I don’t like this,” we aren’t being mindful.

But if we recognize the sound as just sound, and the taste as just taste, and the sight as just sight, and the thought as just thought, we are exuding a great deal of mindfulness.

Mindfulness can best be described as the complete lack of judgment. There is no opinion on the matter. It’s neither good nor bad. It’s really not even neutral.

It just is. It exists the way it does. Whether or not we like it or dislike it is irrelevant.

The Watering Can Analogy

I forget where I heard this, but it really displays the relationship between mindfulness and karma very well:

When karma comes up, it plants a seed. Mindfulness is how we choose whether or not to water that seed. If we don’t water the seed (mindfulness), then no further karmic actions will spring up from that seed. If we react without mindfulness, the seed that’s been planted gets watered and brings forth its karmic reactions.

Here’s a situation > Here’s the reaction to that situation.

This is a lack of mindfulness perpetuating karma. We’ve watered a karmic seed.

On the other side, we have this:

Here’s a situation >  Here’s greeting that situation with no habitual reaction (by displaying mindfulness).

Now, no karma has been perpetuated. We haven’t watered a karmic seed.

When we get to the point where the bicycle has ceased to move (no more karma) and the desire to continue pedaling is greeted with mindfulness, we call that state Enlightenment. 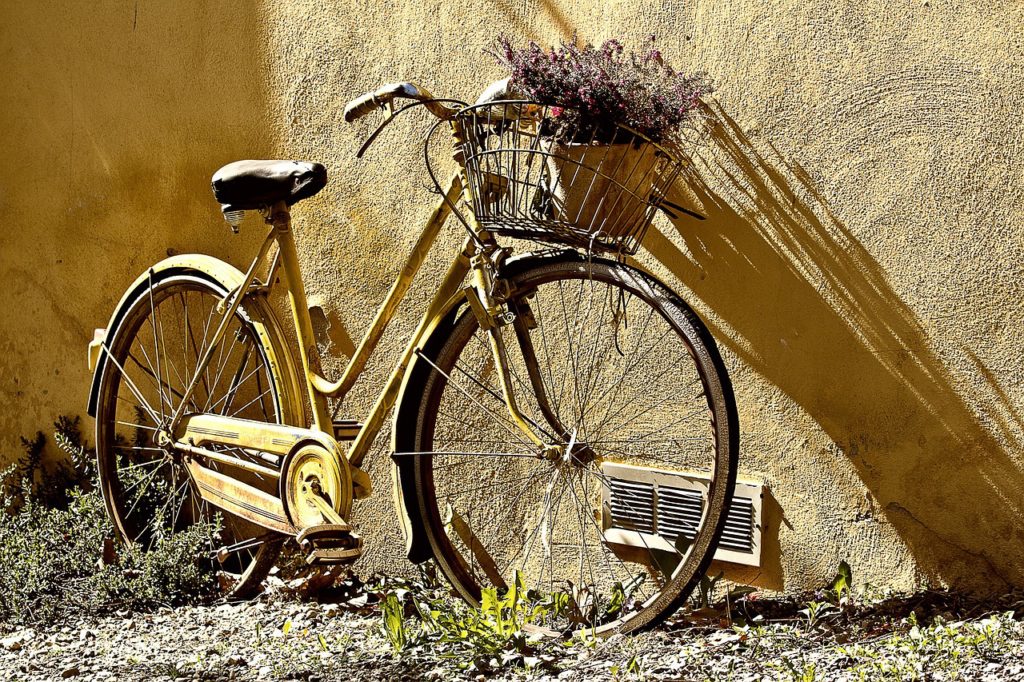 Bicycles can be Enlightened, too.

In this regard, Enlightenment is very tangible. It simply requires us to be mindful of any and all things.

Understand mindfulness, and you’ll understand the Buddhist path and how to reach Enlightenment.

Mindfulness Is NOT Enjoyment

I hear this one a lot.

People often tell me how dancing to music is how they like to display mindfulness. Their reasoning is because it brings their awareness into the moment. But really, they think this is mindfulness because it feels good to them.

Again, simply being aware of the moment is not mindfulness in a spiritual context.

If you break your leg, you better believe your awareness is going to be in the present moment. Would you call it mindfulness then?

What about that roommate that’s still loudly having sex at 5 in the morning? You’re awake and definitely aware of the present moment. Is that mindfulness?

Remember, mindfulness does not mean awareness.

There are two parts to the equation.

Awareness is one part, and the reaction to the awareness of the experience (karma) is the other.

So in the example of breaking your leg, your awareness is there. But reacting to the painful sensations with ear-piercing screams is not displaying mindfulness, even though your awareness is highly focused on the moment.

But recognizing that painful sensation as just another sensation and letting that sensation exist without creating more karma is mindfulness.

Likewise, hearing your favorite piece of music and recognizing the sound as just another sound is mindfulness. The habitual mental tendency to get up and dance is overcome by your awareness of, not only the sound in the present moment but also your habitual tendencies to react in the ways that you typically do.

But the second your foot starts tapping, you’ve lost that mindfulness.

Now you may be thinking: “Well, I sure don’t want to break my leg and experience pain.” Even though this thought is happening in the moment, that’s not mindfulness.

You may also be thinking: “Well, I do want to enjoy listening to music.” Even though this thought is happening in the moment, that’s also not mindfulness.

In both of these scenarios, there is an opinion.

Opinions are the antithesis of mindfulness.

Granted, this is much easier to say than it is to do, which is why we need to practice.

I’ve written many pieces on how to practice mindfulness which you can find here on PVE.

If you want a mindfulness meditation guide, go here.

Essentially, mindfulness is recognizing whatever sensation occurs as a completely unbiased and uncontrollable experience. That is to say, no matter how hard we try, we can’t make the sensations come and we can’t make them go away.

If we think we can, we’re delusional.

The sensations are there and are completely unrelated to our being. Simply being aware of them is all we need to do, but it’s not mindfulness if we are attaching to them.

So simply being aware is enough, but it’s also not enough. We need to maintain the right attitude with regards to how we interact with those sensations. 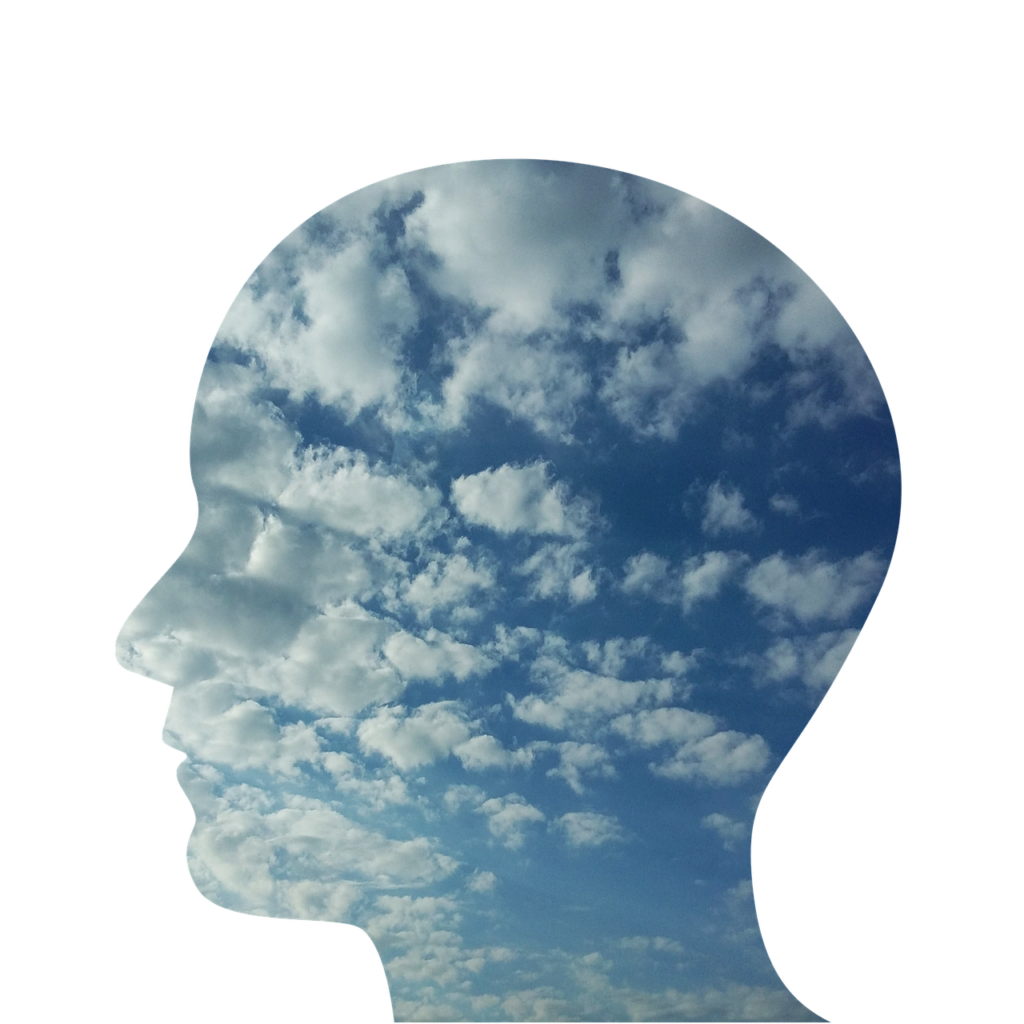 Like clouds in the sky, sensations drift in and drift out…

Mindfulness can take on a lot of different forms, and really, every moment of every day is an opportunity to practice mindfulness.

If you’re trying to build an attitude of peace and stability, there’s no better practice than mindfulness.

If you’re trying to face challenges calmly and objectively, mindfulness practice is the practice for you.

If you’re trying to understand the relationship between mind and matter, then yes, you guessed it, mindfulness is the way to go.

Why Is This Important?

Because mindfulness put in this context (the spiritual context it was intended for) is a highly effective – and some would say the only effective – way to dispel ignorance, greed, and hatred, and eventually reach Enlightenment.

When it’s thrown around as a new-age blanket term for everything from rote awareness to ways of overcoming mental disorders, it loses significance and becomes just another “spiritual-ish” word.

It’s from this understanding that we can start to live as genuine, caring, compassionate, informed, and wise beings.

When this happens, reality becomes staggeringly clear, our sense of personal suffering becomes greatly diminished, and we start to naturally become inclined toward things like love, empathy, and compassion.

When that happens, a life with unfettered freedom starts to open up as the old karmas that we have been perpetuating cease to exist.

When all karma ceases, Enlightenment occurs, and impenetrable peace is the only thing that can survive.

But This Is Dangerous

Now, if we’re sitting there thinking: “Oh yeah, I want impenetrable peace,” then we are not being mindful.

Remember: Opinions are the antithesis of mindfulness.

Mindfulness and peace exist in an intertwined proportional relationship.

Most people don’t have that. I’m no exception.

But that’s why it’s important to practice.

When we practice being mindful, we build up the ability to stay mindful with increasingly difficult situations.

But when that effort is placed into every situation, we start to learn what mindfulness is, what it means, and why it’s so essential.

So Now We Practice

The only way to understand the power of mindfulness: Practice.

Then practice some more.

Then practice even more.

When mindfulness becomes effortless, then everything I’m talking about will become very clear.

It’s simple in theory, but much more difficult in practice.

But like anything in life, practice makes perfect. And when this practice is perfected, all mental and physical suffering will cease to exist.

If your answer is, “Yes, Eric, that sounds really good,” then you need to practice mindfulness more. There’s still a desire there.

There’s still an attachment to a karmic impulse.

So what can you do about it?

For a mindfulness meditation guide, go here: How To Practice Mindfulness Meditation

And if you aren’t yet a Perfected Being, and you have an opinion about this article, leave a comment below!